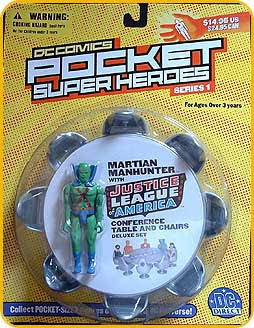 There was quite a bit of time between my purchase of the JLA box set and this beauty, because I just didn't know about it. The fact that I hornswaggled it for a cool buck makes the victory a sweet one that'll rot my teeth for years to come.

So that's where's the Manhunter form Mars went! I was going to say it would be mental not to include the charter members of the Justice League in either one of these sets.

But, he's got a seat at the table, and that's pretty cool. 8 chairs to go around, and each chair has the logo of the hero it's meant for.

You've got J'onn, Flash, Wonder Woman, Aquaman, Green Lantern, Hawkman, Green Arrow, and of course, never one to be left off of anything... The Atom.

You might ask, where in the mighty hell do Batman and Superman sit? Well, not at this table. How this came to be I'll never know. Is it possible the powers that be figured those two had been on enough and it was time to slap the logo's of some of the other schmucks on something? 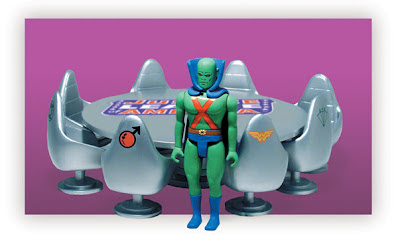 It's just a very cool little piece (actually, it's much bigger than I had expected it to be. It certainly won't fit in any pocket of mine).
I don't even mind that Ray's chair is the same size as the rest of the lot (although with them throwing in "bonus" Atom stuff, I would have guessed The Batman would get his normal chair, and they'd shove in a lil Atom seat as a "bonus" for lucky folks!). I don't mind that if you try to sit any of these members in their respective seats, you must do so with their legs straight out. And if Ray is in attendance, he'll be so standing up in his chair.

To recap, I was and am very happy that Ray got to be a part of this JLA set. I look forward to that happening more AND more down the line.
Posted by Damian at 2:46 AM

do i need to even say any more?

There's a perfectly wonderful "Ray in chair" DC Direct figure to switch out with. J'Onn's holding it in his palm while I hold J'Onn in mine on my profile picture. Netzer also seems to have promised you a sketch along those lines at his blog.

It's all good, as I'm a fan of both characters, but still pretty weird. It's not like the two of them have an exceptional friendship. I only really remember that one issue of "Power of" where J'Onn was trying to recruit Ray as any sort of sign they were anything beyond associates. Hell, Manhunter even seems closer to Hawkman, y'know?

That being my favorite figure of course.
I have one that I have yet to remove from it's packaging in hopes that I can acquire another. Unfortunately, they've become somewhat pricey. I could certainly buy 4 Adam Strange's for every one Ray (or Ray and mini Rays)

I've just since returned from Michael's site, and the hint of J'Onn and Ray sketch is very exciting. Even more so, for me anyway, in that they didn't have much interaction.

I'm glad you brought that up. I was at your blog looking at Hawkman getting clocked in the face, thinking that the two of them have had much more interaction than Manhunter and Ray.
And I immediately though of the POTA issue which you spoke of, and was completely strapped to recall another situation where they even friggin talk to one another.

I've worked it into my petition demands.

Tim Bruckner is a sculpting god. That figure turned out fantastic! I've got one, but I'm not sure what kind of shape he's in today. I had to make an unplanned move about three years ago, and dumped all my DC Direct figures in an old rat poison barrel (don't ask.) I didn't pull them out again until late last year. I recall Ray's arm had popped out of its socket, but I think it went back in okay. Eclipso, sadly, lost his diamond slinging arm at the elbow. :(

Next day I need a filler bunny, or if we ever have cause for a crossover, I've got some great pictures a friend took of toy Manhunter & chairbound Atom having a chat near downtown Houston.

Maybe an armless Ray Palmer will be DC's next move with him.

One way or the other, the need to see Manhunter and chaired Atom will grow greater with each day.