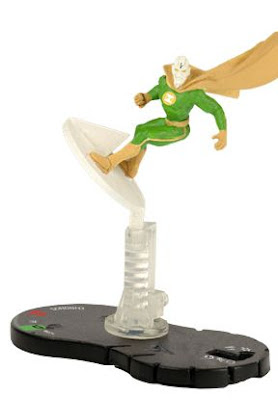 Ohhhhh Chronos, how do you do?

Thanks to Benton, during one of my complaining sessions I was alerted to this thing's existence and wasted ZERO time in acquiring it. Today, I'm a better person for it. Thanks Benton!

For a quick refresher course in my history involving heroclix: this is it. I own some figurines.

This really is a cool little figure, and I'm a big fan of him on the dial with his cape flowing out the back. It's much more enjoyable than the Ryan Choi one here (why is it there's no Ray Palmer heroclix? There's no Ray Palmer heroclix, right? That's mental.), although lack of early Chronos signature pants is a bit of a disappointment I must say.

The figure came with this card here, which displays some of Chronos's finer qualities. 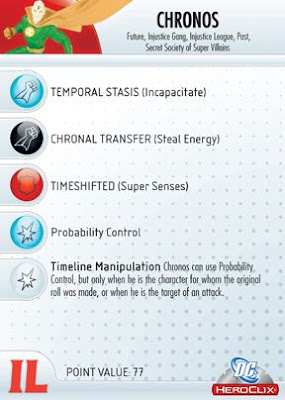 Point value of 77. I wonder if that's good. Maybe one day I'll dirty my hands and leap head first into a no holds barred Heroclix game.
Either way, I'm quite happy to have my newest friend.
Does it fill my need of Chronos action figure with spring loaded wrist watch? Of course not. One day...

Of course I'll never have that beefy Super Powers look I'm desperate for in a Chronos figure. That is, unless I get my hands on a time machine...
Posted by Damian at 1:48 AM

THAT HEROCLIX FIGURE NEEDS THE STRIPED PANTS ON THERE.

there, i said it.

Haha, those pants are beyond awesome....I'm fairly convinced that they were the source of his powers when he eventually gained true time traveling abilities.

Awesome Damian! Ha, 77 is pretty good, he's a villain of some power. Aquaman himself is around 71, and most human villains are around 40. He's really versatile in a game, and he can be powerful if you play him right.

By the way... I know something you don't know! I just found a picture of this surprise, but the one that Rob will be interested in isn't ready yet, so I'm debating whether to show you first.....

Is there a Bug-Eyed Bandit?

I think you know the answer, Benton.

Haha, no, I'm afraid 'ol Bug-Eyed exists only in my mod, not in the 'Clix realm. Since you asked so nicely, though....

No, there is no standard Ray Palmer Heroclix figure (although there is the All New Atom relabeled as Ray, and the lazy buggers didn't even bother to repaint him). HOWEVER, there is this:

A custom repaint I comishioned a little while ago. It should be arriving here (along with something else Aqua-related) by the end of next week.

Reposts from the Aquaman Shrine:

Say, why haven't we seen Atom vs. Starro and his Justice League. That's a cool story idea-- the only member who escapes conquest was too tiny to be contained by a seemingly overwhelming force. You could even sneak in some political allegory to go with the Tiny Titan vs. the Americans...

I concur. It's time the tiny titan goes a few rounds with this Starro, and therefore lock himself in to appear in and on board games, statuettes, "Starro: The Movie," "Starro: The Breakfast Cereal," and of course... Starro faced Atom heroclix.

Benton: How do they get away with re-labeling Ryan Choi Heroclix as Ray Palmer? It's mental.

They need to be stopped.

So you need to get a bug-eyed bandit and Man in the Ion Mask heroclix and we can show the world these customs.

Haha, if I had money to burn, you better bet I'd have me some more Atom villains! Yeah, I know that it's crazy, having Choi labeled as Ray, but apparently they thought that his fans wouldn't notice or something. I mean, they've got almost all the OTHER character variations, including Dick as Robin, Connor as Green Arrow, and even an Azreal skope...like there are a whole bunch of people clammering to get their hands on that loser!

I have tried to get action figure, however its cost is really expensive, it's around $45.95, and buddy, I'm not gonna pay that.