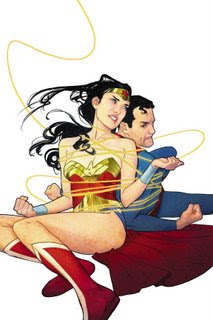 Barren yet intriguing cover by Joshua Middleton.
This is the first story in a 5 part "epic."

I wanted to get into this small series because it features a lot of old faces (the first 2 parts anyway) from the JLA, getting absolutely thumped, and that was just appealing to me!

Aw, too bad by the time Ray gets there... JJ has been knocked out.

Potential spoilers ahead, maybe, but I'll try to sidestep them and wrap it up. For those looking for JLA vs. giant, unstoppable beast... it shouldn't matter anyway.

The story opens with J'Onn looking out at Earth, admiring how beautiful it is and commenting on how it's the only home he has now.
Head on over to the JLA basketball court (!) within the watchtower, where Wally and GL Johnny are shooting some hoops. (they both end up cheating).
It's just pleasant times and pleasant heroes, living the dream. Oh... that is until some gargantuan beast, hearing the faint whispers of the Martian Manhunter, bursts through some lunar surface, makes a bee-line for the JLA base and right through the wall just as our three heroes are doing a "what's up with that proximity alarm?"
Supes, WW, Batman, and the Atom are all preoccupied with their own individual catastrophies, and are forced to temporarily ignore the signal. Although Ray appears to be the only one who thinks it's slightly odd that a signal designed to go off only when the hull has been breached and there's no one around to countermand it, continues to "Meep."
Immediately after bashing the Flash to the ground, MM informs the beast that he has made a "grievous error!"
Monster then informs him, that he and the JLA... have tangled before! 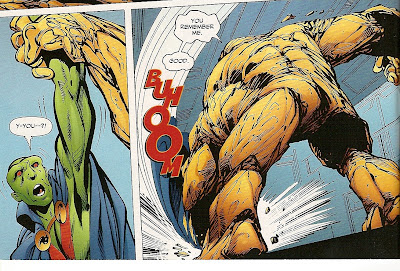 There's a slight scuffle, but big 'n' orange easily drops the three.
Upon Stewart's dive into unconsciousness, his ring sends out the message to the other four that he and the other two have been drubbed, and that the end is nigh. Maybe that's not exactly what he said.
Well, our other heroes must get back! Whoops, Batman informs them that the transport tubes are down to 5% power.
Damn, if only there were someone small enough to...
Right, right.

The Atom heads on through to check out the damage, and it's pretty bad. He and a mangled GL transport J'Onzz over to sickbay, while Bats, Supes, and WW snail it in her see-through jet.

Ray decides to confront the thing and see what he's all about.
Although he actually just winds up standing on the thing, shrinking and unshrinking, dishing out the taunts, which surprisingly only serves to infuriate it. He ends up being the only one to come into any kind of contact with it and remain conscious. 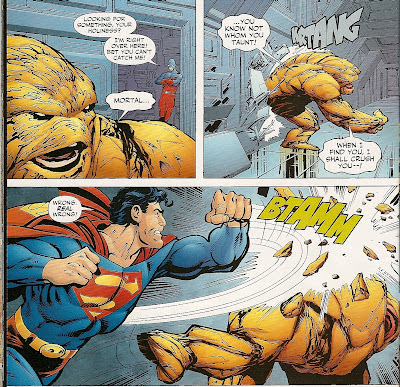 That punch by Supes is the last one any of them will get in.

The issue ends on 2 great shots: One of the giant orange rock beast, arms in the air celebrating the pounding of the world's greatest superheroes, while Batman and the Atom hide out in a corner. Or rather, a creek. No paddles.
The other is the Manhunter desperately trying to communicate his thoughts that he knows what this thing is and that the situation is... not so good. But alas, no one can hear him.

I do enjoy a good JLA getting drubbed story. Particularly when it ends with the Batman and Atom hiding from a big, scary monster.
Stern and Byrne have both worked on the Atom in one shape or form in the past, and I appreciate what they've done here with Ray. I enjoy that he's a part of this team, a pivotal part of the story, and someone that can be counted on.
I also don't mind him talking the talk to a big, giant rock monster every now and then.
With all of the action taking place in the watchtower, Byrne's work is for the most part uninvolved as far as backgrounds go, yet perfectly serviceable for what it needs to be. He and Stern help create what turns into a claustrophobic little piece, with no where to run for our heroes.

wow, i dig that cover! ive had dreams like that.

Ohh! Man, I think I really need to start collecting these JLA Classified books......they seem like the kind of JLA books that I would actually like to read...you know...heroic.

Original gangsta Arthur is in the next issue, Rob.

Benton, they are pretty fun. At least the ones I've been getting, although I admittedly only pick the series up when I know Ray is in them.