Power of the Atom ad poster 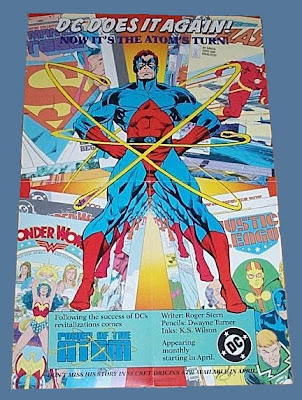 There is no proof this thing exists on the internet (until now!) so this photo is the best you're going to get. You have my apologies.
This poster was sent to retail stores (preferably ones with comics) so it's always a treat when these guys hang on to stuff like this and I can track em down. Super happy fun when it's in great condition as it was never put up.
Of course the problem with that is... it was never put up. Power of the Atom didn't exactly have an epic run there, yanno. I blame all comic book stores that didn't put up this poster. Bastards.
As you can see, DC had done it again, and it was currently the Atom's turn.
With all the revamping and resurrecting success DC was having, it was Ray Palmer's turn (I already said that sort of), with Roger Stern and Dwayne Turner putting it all together. His costume got a lil tweaking, most significantly losing the dome portion of his mask. It would wisely return to his head later on as Dr. Palmer found that fighting crime and keeping the perfect waviness in his hair was nearly impossible at that time due to inferior hair care products.
I made that up. But feel free to use it if you're writing a new hero and are looking for a severe weakness. Just give me credit.
Posted by Damian at 3:18 AM

i always thought that was a good poster; putting the new Atom book in the context of DC's other re-launches.

>>This poster was sent to retail stores (preferably ones with comics)<<
made me laugh out loud, as i imagined this poster hanging up in a JoAnn's Fabrics or perhaps an Adult book store.

Haha! Man, well, that's a cool poster, at least. The stories from that time weren't really all that great, the art was pretty solid.

The Atom would shame all of those going into either JoAnn's Fabrics or an Adult Bookstore. They would see his stern gaze and know that they were wasting their lives....;)

I betcha if JoAnn's Fabrics had carried Power of the Atom and/or put up this poster, it'd still be running today!

there still are JoAnn's, ive spent way too much time in them bored to tears while Tracy shops for artsy/crafty stuff. IF ONLY THEY CARRIED COMICS! (i dont need adult book stores to do that, tho)

I never saw the poster (reenforecment,) but I clearly recall the house ad grabbing my interest. Here was the ground-up relaunch of Superman and Wonder Woman by the biggest names in comics, John Byrne and George Perez! Then there was indie maverick Mike Baron bringing the new style with Jackson Guice, recently renamed and shed of the ill-fitting Mike Golden influence (and pre-lightbox abuse) in the prime of his career! Next there's the comeback kid Keith Giffen, the incomperable J.M. DeMatteis, and future icon Kevin Maguire, balancing dramatic hero action with humor that was *gasp* actually funny!

So here's the Atom's relaunch! Yay! And we're not only going to burden him with the continuity baggage of a failed Silver Age series, but also spend the first issues writing out all the trappings of his successful prior mini-series and specials! And while we've got Roger Stern coming off a fan favorite Spider-Man run, we're going to saddle him with neophyte Dwayne Turner's bland pre-style. Surely this won't pale in comparison to Tim Truman's upcoming Hawkman, the talents on display in the Batman books, or even Curt Swan on Aquaman!

Point being, the poster was a great concept that would have been highly effective if there had been a bit more cheese in that trap. Oh, and the the loss of the skullcap was Gil Kane's idea, not that I wish to dimminish his memory with that clarification. Surely he assumed that everyone would recognize he was drawing a fantasy series and needed the hair, unlike all those 90's creators that started chopping everyone's masks in half. I'm positive at least one of the Az-Bat designs had blonde hair flowing between the ears.

BTW, I know I'm posting here some 5 months too late, but I just discovered your blog. I really like how you enjoy posting house ads and the like, I'm a sucker for that stuff ( loved the Animal Man one...again, old enough to remember it )

And guess where in the world I'm posting from? ARGENTINA!